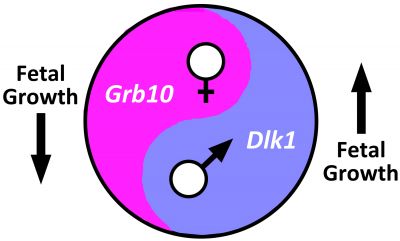 Cover Legend
The Yin and Yang of imprinted gene function. The recent study by Madon-Simon et al. 2014 supports the conflict theory of imprinting (Haig and Graham 1991). This theory posits that imprinted genes are a remnant of a genetic battle between males and females to control the amount of nutrients the offspring extracts from the mother. It predicts that maternally and paternally expressed genes are antigrowth and progrowth, respectively, as seen with Grb10 and Dlk1 (Madon-Simon et al. 2014).